(All Worldbuilding Wednesday posts are here, and as always, you can ask questions about this or any other Parhelionverse thing on the Tumblr blog! These posts aren’t necessary to understand the comic, but they might be handy for summarizing context.)

(Adapted from an exhibit in the Parangya Museum of Cultural History, “Who Are the Zlotl?”)

Zlotl hail from the marshy continents of Umsaa, with an extensive network of cities above and below water. Our hospitality and medical prowess are known throughout the galaxy, but where did we come from, and how did we get here?

Here, we have a rendering of the earliest known sapient zlotl:

Umsaa has few plants suitable for textiles, and our species’ flexible endocrine system made it much easier to simply manifest chitinous plating with the right mix of herbs. Archaeological records from this era are sporadic, but it is likely that zlotl of this era devised crude biological castes, and showed the first stirrings of artistic creativity.

As the years progressed, zlotl fused textiles and endocrine science to guard themselves. In the process, they organized into nomadic clans led by a Daimyō, battling for scarce minerals to smelt stronger tools and induce stranger hormonal effects. Clans developed artistic motifs to distinguish themselves, and produced stunning tapestries to show off martial victories, creation myths, and honored lineages.

The feudal era came to an end when the Huitztopak Dynasty unified the continent, establishing a stable society for six centuries. Mass production of tools and textiles became feasible for the first time in zlotl history, liberating citizens from biology. Sashes declared a citizen’s lineage and social privileges, and many wore trinkets signifying their clan heritage.

The Huitztopak Dynasty fell after a string of natural disasters exceeded its response capacities, and Umsaa returned to tribalism, each with a different perspective on the merits of Imperial life.

First contact with alien cultures set off a craze for foreign styles. This is widely regarded as the nadir of zlotl culture.

As zlotl embarked through the galaxy, some sought to reclaim their heritage and biology, paying tribute to the earliest zlotl cultures. This style frequently mixes conventional textiles, endocrine modification, and living material to celebrate all that is uniquely Umsaan. 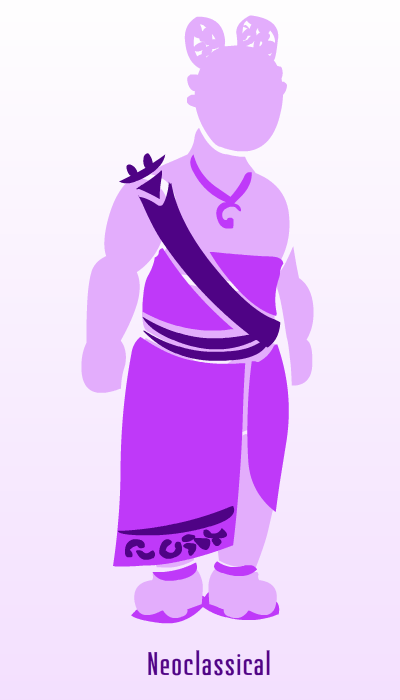 Alternatively, most spacefaring zlotl pay tribute to the peak of Huitztopak civilization, updating its motifs with modern materials and foreign flourishes. Their efforts have stirred an interest in zlotl history among foreign scholars, especially its legacy of entwined art and biology.

Looking to the future, we expect great fruits from galactic cooperation, uplifting the state of science and culture wherever we may travel.